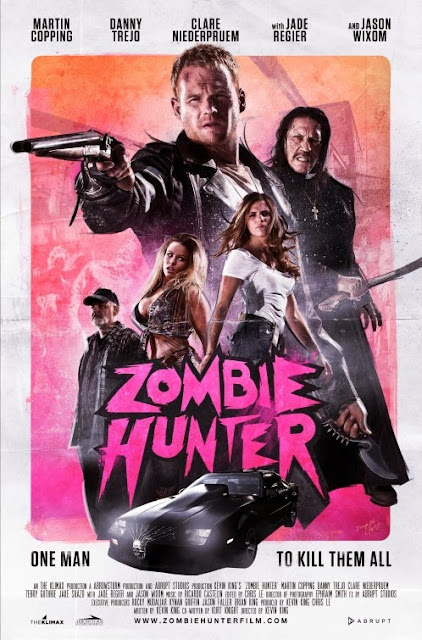 When a street drug turns junkies into an army of giant, mutant flesh-eaters, no hope is left – but one man remains. Hunter’s got nothing left but a beat-up Camaro, a trunk full of guns and booze, and a vendetta. He crashes into a small group of survivors, led by an ax-wielding priest named Jesus. They’re searching for the Promised Land – but does it even exist? They better pray for a miracle, because the zombies are hot on their heels. And the psychotic clown with a chainsaw? You don’t even wanna know …

Take a look at this cover. 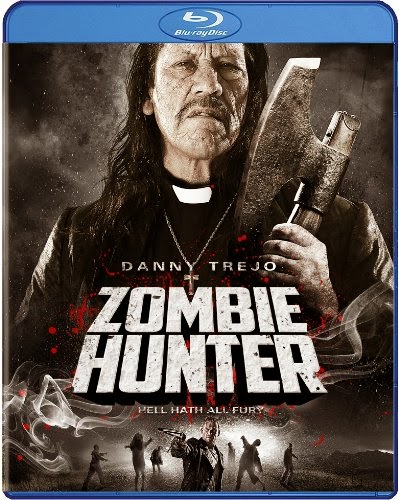 Stare at Danny Trejo. If you do this for five minutes, you’ll have just looked at Danny longer than his accumulated amount of screen time in Zombie Hunter. This movie is like a combination of Mad Max and Planet Terror. It has zombies, flesh-eating, gore, a badass car, pole dancing, ridiculous one-liners, and Danny Trejo ripping shit up. That’s a serious combination of awesome, right? Pretty much everything you’d want out of a B-zombie flick. Well, sorry to say, it’s goddamn terrible from start to finish.

All of those elements, and yet, Zombie Hunter is boring as hell fifteen minutes in. The pacing is awful. It’s like Uwe Boll made an Asylum flick for SyFy but somehow made sure it wasn’t entertaining. From a visual standpoint, certain areas aren’t too bad. I kinda favored the whole pink lighting approach. Trejo’s flashback montage wasn’t too bad.

It’s hard to fault shoddy acting in a film this underwhelming. Trejo is who he always is, and that’s pretty fun. Way too short lived of a performance, though. Martin Copping plays our lead, Hunter. He’s wearing more eye shadow than every member of a mall-goth metal band combined. I love one-liners, but what this guy spouts out… ugh (“Nothing puts a smile on my face like a midday massacre”). The best character in the movie is Alison, played by Clare Niederpruem. It’s not an amazing performance by any means, but she definitely adds some charm, and she’s cute as shit.

Zombie Hunter definitely has some gore to it. Innards, chainsaw chopping, zombies exploding into big blubbery messes of pink, and so on. I’m a little torn between thinking the zombie makeup looks awesome and thinking it looks like shit. There’s kind of a Nightmare City resemblance in some instances. Sadly, Nightmare City, Zombie Hunter is not. Not by a long shot. Lastly, this is another one of those flicks that uses CGI blood-spray, and it’s absolutely terrible. Why is this so common now? Why can’t someone just run behind the camera and sling a bucket of gore across the fucking wall? Is it that much more cost effective to go digital? Is it even that worth it when it looks so bad?

Christian Davis provides a good synthy type score for the film, very reminiscent to something you might hear in an early 80s horror film. That rock soundtrack, though. I hate these radio friendly sounding metal bands. I really hate when said radio friendly sounding metal bands write a ballad that makes their fans wanna drive around and think about stuff. This is the kind of shit in the first 5 minutes of Zombie Hunter. I debated turning the sound off to lip-read.

Obviously, I did not enjoy this movie. But, I’m not going to tell you not to. It’s available now on Blu-ray from Well Go USA and can be ordered HERE.