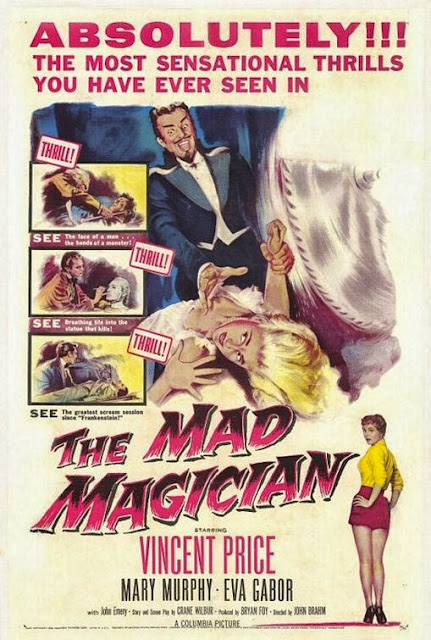 Vincent Price plays Gallico the Great, an inspired inventor of magic acts who longs to perform his creations himself. When he finally gets his chance, the production is closed by Gallico’s cruel manager, who wants a rival magician to perform Gallico’s greatest trick, The Lady and the Buzz Saw. An enraged Gallico turns into a homicidal maniac, taking out his victims with the same methods he used to create his illusions.

The Mad Magician is one of those movies where a man is wronged in the worst imaginable ways, and he goes off the deep end, and you don’t blame him. Matter of fact, you’ll root for him. Losing his hard work to his manager is really just the tip of the iceberg; something of greater importance is taken from Gallico, as well. Once he starts exacting his revenge, the movie becomes truly creative. He has the expertise of a magician, and uses these elements in order to wipe out his wrongdoers. You throw the great Vincent Price into a role like this and he straight up shreds the scenery.

The Mad Magician was originally shown in 3D, and there are several instances where you can see the gimmick being put to good use. A particular favorite moment of mine is where Gallico is on stage performing magic tricks with spouts of water. This moment is quite the spectacle, even without the joy of red & blue glasses, but I can imagine seeing it in 3D back in 1954 was amazing. The Mad Magician is also the first movie shown in 3D on television, in 1987 -according to IMDB and Wikipedia. I can’t find any concrete evidence to confirm this, but I will say that the year seems a little off to me.

On the acting front, Vincent Price is really on top of his game here, especially when considering he plays more than one character. But it’s as Gallico the Great where he really shines. That voice of his; it will never get old. Donald Randolph plays Gallico’s jerk manager, Ormond, and he’s absolutely perfect. You’ll yearn for the absolute worst to come to this man. John Emery as The Great Rinaldi fits the part of a ego-heavy established magician quite nicely. Mary Murphy plays Karen, Gallico’s assistant, and brings that lovable girl next door element to the role. Patrick O’Neal fills the shoes of her police officer boyfriend, Alan Bruce. Lastly, Eva Gabor stars as Claire, Gallico’s ex-wife. Good grief, what a looker she was. Claire’s described as a trollop, and that’s honestly the most adequate way of putting it.

The Mad Magician isn’t heavy on special effects, obviously, but the face masks made for Price’s character to wear are pretty astounding for the time. By today’s standards, of course, it just looks like Price in a face mask, but in 1954 I assume it was totally jaw dropping. To be honest, I was pretty impressed seeing them presently, as you can tell a whole helluva lot of work went into them.

The Mad Magician won’t be the best Vincent Price movie you’ll ever see, but hey, the more of his movies, the better. It’s a quick little 72 minute feature where you are treated to Price quickly descending into lunacy, and that should be all you need to know to make seeing it a must.