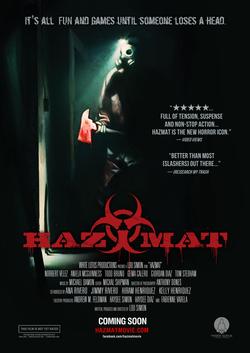 Scary Antics is one of those hidden camera shows, where people walk around darkly lit buildings, unknowing that they are on camera, looking ridiculous. For a special episode, a group of friends take their messed up buddy Jacob to an abandoned chemical factory where his father died. Seems like a sound idea, right? Especially since he believes the place is haunted. The Scary Antics Crew and Jacob’s friends are having a good ole time until an accident occurs. Next thing you know, they’re trapped inside being hunted by a fiercely sprinting maniac with an ax in a hazmat suit.

I have to give props where they are due; the hidden camera aspect of HazMat felt damn near identical to the type of shows Scary Antics is emulating. Most of the people on those kinds of programs are super annoying, and the crew behind them are equally bothersome with an added dash of douchebagism. This film nails that aspect. Unfortunately, that’s where some problems lie for me. I absolutely can’t stand these types of shows for those reasons. So when you take this element, throw it into a movie, and turn the fear of the mockup show into the real deal, it’s impossible for me to care about the characters. Even when the group and the Scary Antics crew realize that some sinister shit is going down, they don’t become any less fucktardy. Matter of fact, most of them get worse.

Now, this doesn’t mean that I hated the movie. I actually liked it a good bit once it got past some pacing issues, which is a problem that takes us back to the film’s characters. Spending thirty minutes of going back and forth from Jacob and his friends to the TV crew without anything happening is just too much time. But once we get to the half hour mark, shit starts to get a little cray cray, and it’s a lot of damsels and dudes running around in the dark trying not to get chopped the fuck up. The downtime in between the chase scenes is kinda bothersome, because once again, these characters blow, but at least there’s now some action weaved in. Some pretty intense action, at that.

The killer looks and mostly operates as if he went to the school of Harry Warden. The hazmat suit and mask is very reminiscent of My Bloody Valentine, and his weapon of choice and the way he uses it is a close equivalent to Warden’s pickax, as well. The killer is the absolute best aspect of HazMat. He is a fucking relentless maniac, running through the dark claustrophobic hallways of the abandoned factory, swinging his ax like Paul Bunyan if someone egged his house… just hoping that his weapon meets a body part. He’s never slow, and he’s never not menacing. Had this film given us about 30 more annoying characters and just lined them up for a slaughter, we would have a seriously badass slasher flick with no time for slowness.

On top of the killer being awesome, he comes with some cool murder scenes, too. I’m not gonna delve into this aspect, though, but slasher fans should definitely approve of the gore.

While I had some issues with the characters and the downtime, I still found HazMat to be worth viewing, as there are certain elements I definitely enjoyed. And it comes with a neat twist, to boot.  I could definitely recommend it to fans of The Prowler and MBV; it feels like a younger sibling of those films, just trying to learn the ropes. Nothing wrong with that.