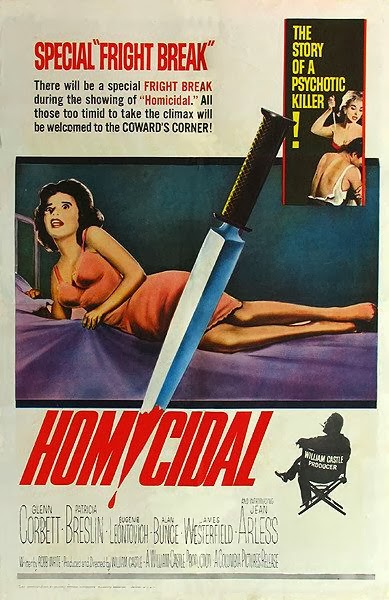 A vicious murder of a justice of the peace leads the police to Salvang, California, where the murderer, Emily, lives. As we delve into Emily’s life, we see her erratic relationships with her family and friends, and we learn about an inheritance worth millions.

Call William Castle a ripoff or a hack or whatever; the fact still remains that he was a genius at marketing his movies. Even the gimmicks that didn’t work were super intriguing. For House on Haunted Hill– filmed in Emergo, wire attached skeletons flew over the audience. The Tingler– filmed in Percepto, vibrating buzzers were used under the theater seats. 13 Ghosts- filmed in Illusion-O, the audience were given ghost viewer’s/removers. And that brings us to Homicidal, which contains a Fright Break- a 45 second timer starts right before the film’s finale, and Castle narrates, warning the viewer to leave if they’re too scared. They would be lead to the Coward’s Corner. I’d absolutely kill for gimmicks like this now. It’s a dying art.

As I watched Homicidal and even more so, when I went over the special features, I began thinking how awesome it must have been for horror fans back in yesteryear. You left the theater, freaked out your mind, went home, and that was it. Maybe talked to a few friends. There was no Internet with an onslaught of haters going off seconds after a film’s first showing. Things were so much more modest. Don’t get me wrong; the internet has given us a lot of awesome, and it’s given everyone a voice. But maybe just once I’d like to live in a past where things seemed so much easier, and people weren’t so quick to the jab.

Anyway, about the movie, Homicidal. It’s William Castle doing Hitchcock’s Psycho, in terms of style. Way different kind of story, though. But many of the shots look eerily similar. That’s okay. Psycho was seemingly influenced by earlier Castle films, or B-horror in general. Hitchcock was definitely much more skilled of a filmmaker than Castle, but there’s a strange taboo to Homicidal that makes it really hard to not appreciate. It must have been pretty mind-blowing for its time. If you look at the special features on the disc, one takes you to the premiere of the film, in Youngstown, Ohio. You get crowd reactions like “Better than Psycho” or “Didn’t see the ending coming at all”. I can’t really agree with these. I don’t find it as technically sound as Psycho, and I had guessed the ending maybe twenty minutes in. But it’s the idea of the ending and the time-frame of which Homicidal was made that creates a shock factor. I wish I could travel back to 1961 and see how genuine the crowd reactions were. And if you watch Castle, he seems totally pleased -and even flattered- with what he’s hearing.

From a visual standpoint, Homicidal is very much like Psycho. You’re put in settings and situations which strongly mimic Hitchock’s film. A bathroom, car rides with faux backgrounds, staircases, and so on. There’s nothing really wrong with it, if you ask me, but there’s no denying that the visual style is obviously influenced.

Acting is pretty solid. I mean it’s very over-the-top in many areas, but it kept me fully entertained. Jean Arless (aka Joan Marshall) as Emily is downright frightening with her facial expressions and how her voice hits insan-o levels when the character goes mad. Her eyes jolt big in the first stabbing scene, making it doubly effective. Eugenie Leontovich plays Helga. For a character void of dialog, she was really effective, by only being able to communicate through the means of a frantic sort of Morse code on the arm of her wheelchair. You can sense the character’s sadness through the facial expressions created off of hope and fear. Glenn Corbett and Patricia Breslin as Carl and Miriam are also quite a delight as the ‘young love’ characters of the film.

This being 1961, Homicidal isn’t drenched in flying body parts or people barfing their guts out, but Castle definitely tried to amp up the violence that Hitchcock had in Psycho. There is a stabbing scene in this movie that is pretty intense, even by today’s standards. Lot’s of blood, evil in the eyes of the antagonist, fear and panic in the eyes of the victim, close-up shots of the victims bloody shirt, and that last grasp for life of the character as he hangs on to a curtain before meeting his inevitable end. This sequence is menacing, and definitely gets the job done.

At the end of the day, Homicidal is not my favorite William Castle film, not by a long shot. I can watch House on Haunted Hill or The Tingler any given time. But, this is a nice change of pace- a pretty effective thriller. While the twist may be easy to guess now, it’s still pretty jaw dropping that it was even attempted, and the acting is really what knocks it out of the park. Recommended.

Homicidal: Youngstown, Ohio Premiere – Using some of the same premiere footage seen in the previous feature, this is more about the crowd’s reaction to the film, with William Castle himself asking the questions.