Chad Morgan and Ashley Sera are starting their new life together. They’ve recently gotten engaged and have moved into an apartment in a new town.

Everything is seemingly perfect; except for one thing – their next-door neighbor, Mr. Reed. After a bizarre encounter, Chad begins to realize that if he doesn’t unlock the secret to this mysterious voyeur soon, he may lose everything – including his mind.

“The Darkness Within” came out of left field and has become one of my top picks for 2010 so far, with a remarkable story, believable acting, and an ending that will leave your mind blown, this is a must see for any horror fan. Made on a budget of almost nothing “The Darkness Within” is a perfect example of indie filmmaking in its purest most guerilla form.

A spring-break sleepover takes a turn for the worse for six sorority co-eds, after Stanley Peterson, convicted serial killer, escapes from maximum security prison. It’s up to the college ladies to survive the night, and at the same time figure out who is behind all of the grizzly blood-soaked antics.

“Spring Break Massacre” is a homage film done so flawlessly it’s hard to believe it wasn’t discovered on a rack of VHS tapes in a local mom and pop video rental store. This indie flick deserves a view from any children of the 80’s who are in need of a reminder of what made the era so fun and unforgettable.

Burning Inside tells the story of a man known only as John Doe. Who has awaken from an extended coma with no memory of his past life, no clue as to who he is, or what happened to him. After obtaining a new life with a wife and normal existence he suddenly finds himself filled with a need for revenge that must be carried out by any means necessary.

“Burning Inside” is a truly unique cinema experience, from the start to the end I found my interest peeked and a building tension caused by the fact there is very little dialog, which is enhanced even further by a great mix of ambient sounds and music. Most definitely an art house style picture so if you find yourself unable to tolerate such films you may not enjoy this one as much as me but none the less I believe “Burning Inside” deserves to be viewed.

Mercy follows the story of John Mercy, an ex convict who will soon discover that life after prison is far from easy. After meeting a strange woman inside a bar he finds himself on the brink of insanity and at risk for ending up back in jail for violation of his parole.

Remember when horror used politics and current news to induce terror? If you answered that with a loud “Fuck Yeah” then “Mercy” is a film you must locate and view as soon as possible. It’s take on life after prison for an ex con is mesmeric and will leave you thinking, something that is lacking from a lot of today’s modern day horror. This film has a very classic Hitchcock feel to it and is shot entirely in black and white I highly recommend this to any fan of classic horror.

A horrifying tale of revenge that begins with a back-alley abortion, and ends with a bloodbath so vicious that it brings a new meaning to ‘an eye for eye.’ From pimps to dealers and hookers to junkies, this film dives headfirst into the depths of human depravity.

Growing up I was a real gore hound I always went out of my way in order to find the most graphic, offensive, and sometimes downright sickening films I could get my hands on. So naturally when I came across “Hanger” I was beyond excited and after all was said and done found myself smiling ear to ear. This is a must see for anyone who grew up watching 80’s gore and sleaze flicks if you enjoyed the golden days of Tromaville, “Hanger” will skull fuck you and toss you in a dumpster afterwards, and when it’s over you’ll discover you enjoyed every last second of the assault.

Adam Mason has quickly become one of our favorite directors at The Liberal Dead. He has an uncanny ability to take next to no budget, and create something that will blow your mind. “Blood River” is his best film to date, and a true cinematic masterpiece. The story follows Summer(Tess Panzer) and Clark(Ian Duncan) as they travel across the desert to tell Summer’s parents that she is pregnant. A car crash that follows what I would say is the most interesting piece of film ever dedicated to a tire blow out, leaves them stranded. The film is set in 1969, so it’s not quite as easy as just pulling out their iPhone and calling AAA. Clark, and Summer head out on foot to the nearest town, “Blood River”. As the couple arrive, not only is there a cow carcass laying at the entrance to the town to greet them, but there are various skeletal remains scattered across the grounds, and nothing much else. It’s completely abandoned. Soon, we’re introduced to Joseph(Andrew Howard), who is seen from the distance, appearing out of nowhere. It’s made immediately obvious that there’s something not right about Joe, but they are so desperate for help at this point, that they’re willing to overlook his quirks. Leaving Summer behind, Joseph, and Clark head off into the desert, in an attempt to salvage gas from the crashed car, and siphon it into Joseph’s car. This is basically the top of the coaster. It was great up until this point, and the ride just gets better from here.

“Blood River” is one of the best films I have seen in a long time. It’s currently getting the shaft as far as US distribution goes, but you can have it imported from the UK via amazon.co.uk. This is a film that would be worth the price of a region free DVD player if you don’t currently have one. It’s a crime that this won’t see a wide theatrical release, as it deserves it more than most movies currently playing at the cinema.

Have you ever been skull-fucked after an ass rape? This is one of the many perplexing question posed by Twisted Twins “Dead Hooker In A Trunk”. Identical Twins Jen, and Sylvia Soska wrote, directed, produced, and starred in this wildly dark, and comedic horror/comedy that delivers what the title promises. The twins play, well… twins, whom are the polar opposite of one another. The story follows the sisters, and two of their friends, after they find a dead hooker in the trunk of their car after a long night of partying. Everything that follows is complete insanity.

“Dead Hooker” does well to capture that “indie” feel of the mid to late 90’s. If you’re a fan of films like “Doom Generation” You’re in for a treat with this one. The dialog is sharp, and funny, and well delivered by all involved. The violence is depraved, and plentiful. “Dead Hooker” is a film that you should go out of your way to purchase. It’s a film that you can watch over and over again with a room full of friends, and still laugh till you bleed. “Dead Hooker” isn’t available to purchase yet, but keep your eyes peeled to fortyfps.com for details, and use their contact form if you’re interested.

Long Pigs is a mockumentary in the spirit of “Man Bites Dog”. Two filmmakers follow Anthony, a cannibalistic serial killer as he does his thing. The two document the entire process, from the stalk, to the kill, to the eventual cooking and eating of Anthony’s victims. “Long Pigs” is absolutely haunting, and eerie. Anthony Alviano does such an amazing job at portraying “the serial killer next door” that his presence will haunt you long after the credits roll. There is something about the matter of fact way he goes about his business, humming as he carves the meat from the suspended corpses of his victims. The sense of joy that you can see in Anthony’s face as he’s preparing his meal is sinister. This film is living proof that practical FX trump CGI any day of the week. As disturbing as it is, the effects are absolutely gorgeous as Anthony is carving his victims up. One scene in particular, displayed in fast motion, Anthony completely “dresses” one of his hanging cadavers, and it is extremely convincing, and very well executed. “Long Pigs” is currently available to purchase via amazon.com. If you’re a fan of indie horror, I DEMAND that you buy this film. It’s absolutely required viewing.

Sympathy, in its entirety, takes place in one hotel room. After a bank robbery that we’re not witnessed to, Trip, played by Steven Pritchard, has taken Sara, played by Marina Shtelen hostage. Trip cuffs Sara to the bed while he maps out a path to Canada, where he intends to catch a plane. After a quick trip out, trip returns to an unexpected visitor, and so the insanity begins. I have to say, even though it’s fairly obvious that the film was made on a near nonexistent budget, I enjoyed the look that they accomplished. Sure, it looks cheap, but it looks grainy, and it manages to feel like the exploitation flicks that it’s partially paying homage to. Sympathy is the perfect blend of a Hitchcockian thriller, and a straight up exploitation film. It does a perfect job at keeping you guessing, while serving up a few moments of pure splatter. If this is what first time director Andrew Moorman was going for, he’s definitely hit his mark. Sympathy, as you can tell by the title of this review, is a film from 2007, but it didn’t get picked up for distribution until this year. Thankfully, Vicious Circle, and Breaking Glass Pictures took a chance on this one, otherwise it might have never seen the light of day. My hope is that somebody from some big name studio will see Sympathy, and give Moorman a budget. I think, if given the proper resources, he has the potential to become a next gen master of horror. Sympathy is currently available through all the normal channels. While you can rent it from Netflix, I would recommend heading over to Amazon and just shelling out the dough for a copy of your own. It’s the perfect genre film, and it’s something you’ll want to revisit. 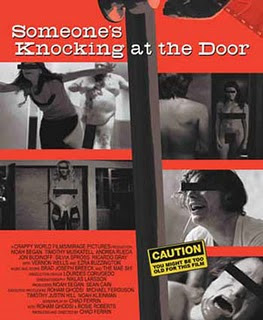 Someone’s Knocking At The Door(2009)
Chad Ferrin’s “Someone’s Knocking At The Door” is a complete mind-fuck of a film. A group of medical students break into the archives room, and read about a demented serial killing couple, that raped their victims to death. Also on file is an experimental drug that was being tested on the couple. So of course, the students decide to test the drug out. Soon they become hunted by the serial rape/killing couple, and begin to get picked off, brutally, one by one. “SKATD” is one of those films that has more going on than it leads you to believe. As an onlooker, it looks like just another modern day exploitation film made simply to shock you, and while it does shock, it’s also surprisingly marketable considering the subject matter. Though I can understand why “SKATD” didn’t go theatrical, I really wish it had. Even with the extreme premise, I think audiences would have enjoyed it. It’s sick, it’s depraved, and it’s a ton of fun. “Someone’s Knocking At The Door” is definitely a cult classic in the making. Though it sells out fairly often, you can find “SKATD” available for purchase via amazon.com. Director Ch ad Ferrin often updates his facebook friends as to the quantity of discs available for purchase, so drop him a line sometime.