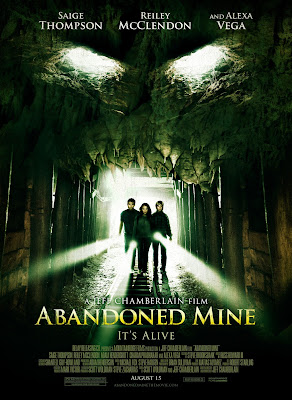 Well this wasn’t my pint of beer, if ya know what I’m saying. Had Abandoned Mine came out around the time I was in love with Dawson’s Creek and Party of Five behind closed doors, it probably would’ve worked for me. Unfortunately, it just felt like a really dated Lifetime horror film with a slight Halloween essence about it. It’s not completely awful, but that’s kind of the problem. I prefer my films to be either excellent, so bad they’re good, or goddamn laughable. I aint got much time for “blah”. And that’s pretty much how I felt about Abandoned Mine. The horror is never once horrifying and the intensity is never really intense. It’s just all around mediocre, and I find mediocrity more disappointing than a piece of shit. 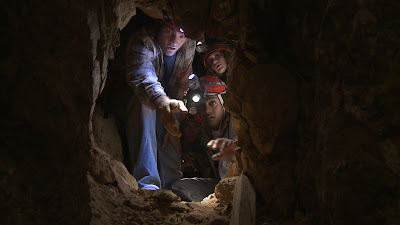 The story takes place in a small town. One of those towns you are lucky to ever make it out of. Five friends decide to go spend Halloween night at a legendary haunted mine. Some truly awful things happened their, and it’s all still a big mystery. It’s haunted; that’s all anyone really knows. The entire night is to be filmed by the youths, via mini-cams attached to their mining helmets. Once they get inside, they become trapped, and their Halloween fun is no longer a good time. Could all the local legends of the haunted mine be true?

The premise is interesting enough, and there’s a lot of room in Abandoned Mine for a solid horror flick. Unfortunately, it’s just all too pedestrian. I don’t mean “Hey! It’s PG-13! Screw this!”; I have no problem with that. Most of the time, a PG-13 horror film really tries to amp up the scare factor, because it doesn’t have gore going for it. Abandoned Mine might try to make you shit your undies, but it doesn’t succeed. There could have been a heavy dose of creepy atmosphere added with a thicker film score. But there’s way too many generic pop ditties all over the place. In fact, pretty much every time there’s a scene change for the first part of the film. Also, as I said earlier, the scares just aren’t scary. Not even split second scary.

There’s some pretty nauseating dialog from the leads, and three out of the five aren’t too terribly likable. It doesn’t really have anything to do with the performances; the cast seems capable. My two favorites are Laurie, who left town for a while (played by Saige Thomspon) and a male friend she brought back with her, who goes by Ethan (played by Charan Prabhakar). This poor dude is the brunt of the other two males’ jokes for a fair portion of the film, due to his ethnic background. Fucking really? Anyway, these two characters were not bad, and Thompson and Prabhakar give the best performances here. But as I mentioned earlier, no one was terrible. Also, Alexa Vega from Spy Kids stars, and she’s became quite the hottie.

So, that’s about all I have to say here. I don’t want to sway anybody away from checking it out; by all means do if ya like. You might take something away from it that I didn’t. You’ll have your chance soon. Abandoned Mine hits select screens and VOD on August 15th, 2013, from Gravitas Ventures.