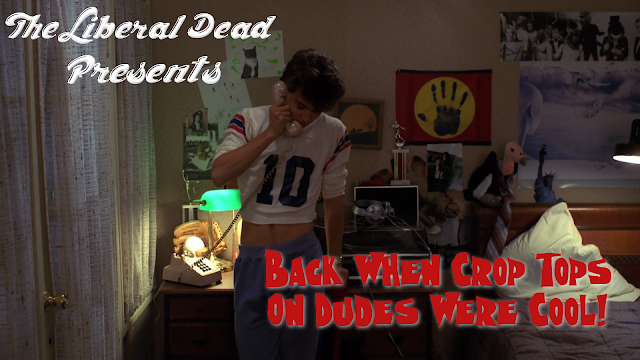 Apparently some people thought so. It really wasn’t out of the ordinary to catch a guy sporting a belly shirt in an ’80s movie, especially if said movie had a workout scene or some type of nod to sports. Shawn ‘Liberal Dead’ Savage pitched this idea to me a few weeks back, and we started tossing names back and forth to each other. Some of the memories were clouded, though. We’d throw a couple of titles into the field, only to search it out and discover that we were wrong as shit. But we got some heavy hitters, for sure. I always found half shirts to be pretty damn sexy on a lady. On a dude, it just looks kinda weird. However, 9 times out of 10, the man with enough nerve to wear one was either a hottie or at least popular. Not always, though, as you will see below. This isn’t a definitive list; I’m sure there’s more out there. Hopefully enough for a second installment. Anyway, here goes!

Bozo and Slug- The Toxic Avenger 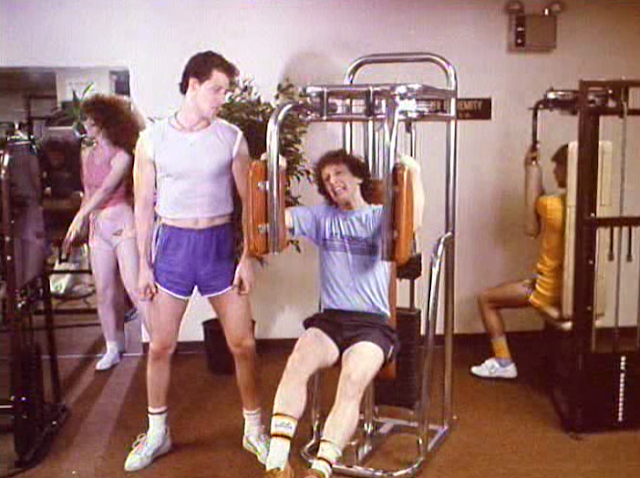 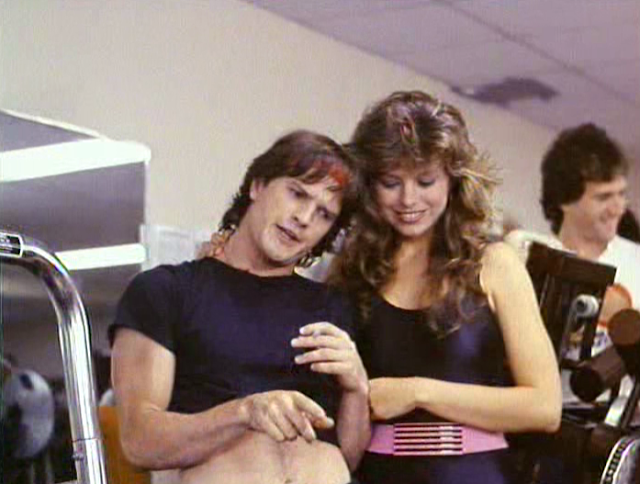 Ah yes, starting it off right, with the two dickwad bullies who make Melvin’s life a living hell. I would put Bozo and Slug in the ‘not really hot’ category, but ‘sorta popular’, I guess? I mean they got some bangin’ ’80s ladies with them. So, maybe this kinda proves that there is an unknown force of awesome behind dudes wearing crop tops. 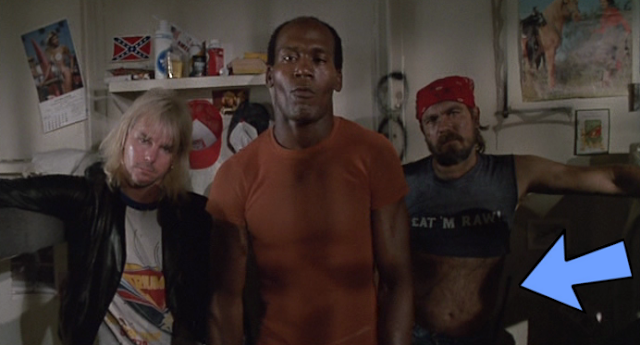 Yeah. I placed an arrow pointing to this dude’s belly, just in case it isn’t crystal fucking clear that he’s wearing a half shirt. I first gave a nod to this scene in a review I did for Ernest Saves Christmas over at Shit Movie Fest. Ya know what? These guys come off fairly intimidating in a “I’m gonna get the piss beaten outta me” way, until you look over to homeboy on the right and notice he’s kickin’ a crop top that reads “EAT ‘M RAW!” Then ‘intimidating’ just becomes kinda creepy, and gross, and damn, Velcro belly from hell. I’d say this entry also fits into the ‘not really hot’ category, and probably not so ‘popular’, either. There’s really no excuse for this one. It just IS. 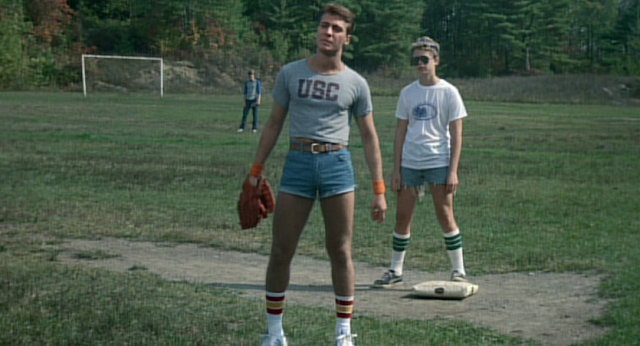 This one barely qualifies, right? It’s almost as if Billy is embarrassed to be wearing a crop top. That’s okay, because…

Gene’s got it under control! 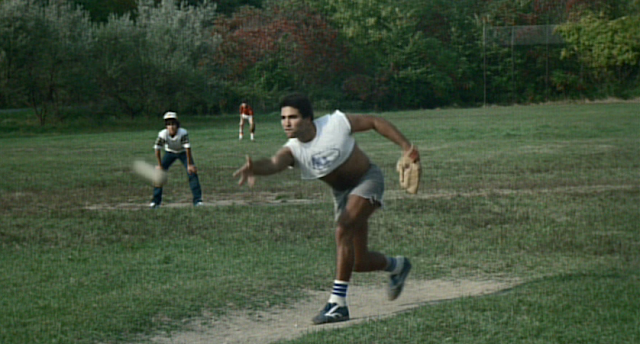 HOLY SHIT! If this were a top ten list, Gene would be a heavy contender for the #1 spot with that motherfucker. Dude is sportin’ it proudly. And why the hell not? He’s as suave as suave gets. And look at that ball throwing posture! I’m getting all hot and bothered over here! 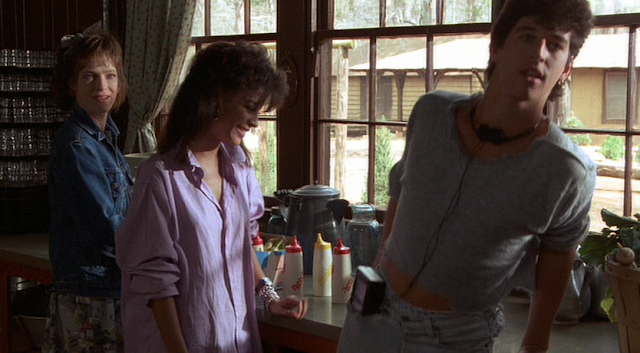 Cort, another good lookin’ and seemingly likable dude kickin’ a crop top. He likes to rock Alice Cooper, wears Def Leppard’s ripped jeans, and his girlfriend is that “there’s only one other titty quite this pretty” girl from Can’t Buy Me Love- SCORE! Admittedly, Jason Lives is not a favorite of mine in the series. I know, blasphemy, right? That being said, I’ve probably watched the thing 30 goddamn times, and at least 3 of those viewings were this year. Anyway, while not a favorite, Cort was indeed a favorite character, and I was always kinda bummed that he bit the big one in a major fucking way.

Bill makes this shit fucking work. What else can be said? Jimmy Terror from Dr. Terror’s Blog of Horrors reminded me that this isn’t the only belly shirt endeavor of Alex Winter, as he rocked one as vampire Marco, in The Lost Boys, as well. 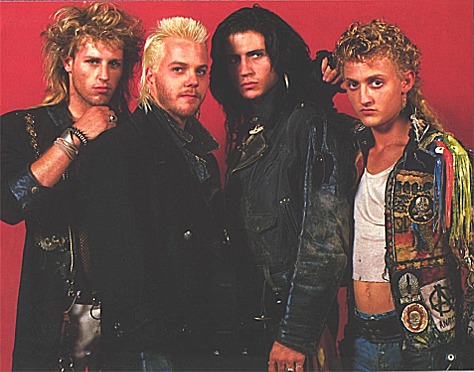 What this means is that if I ever have the honor of meeting Alex Winter at a horror convention and he’s not wearing a crop top, I might cry, a little. But, going back to Bill & Ted, apparently this fashion nightmare wore off on Keanu Reeves a little bit…

Glen- A Nightmare on Elm Street 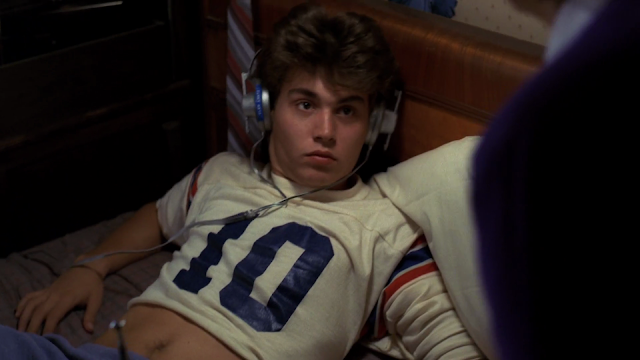 Johnny Depp, another hot dude giving some love to the belly shirt. Unfortunately, he looks fairly dorky in it. Apparently Freddy didn’t approve either, because he ices Glen’s poor ass minutes later, spraying the room with enough blood to fill a fucking Olympic size swimming pool. The bitch of it all is I don’t think he even stayed awake long enough to catch Miss Nude America. 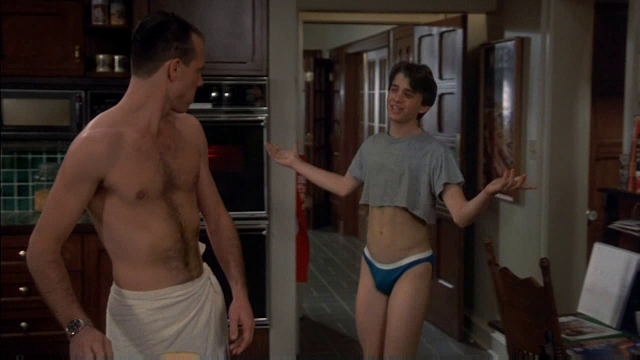 Do we need words here? Do I have to type? No, I do not. But I will, a little. Wyatt makes out with Kelly LeBrock, has a bad ass party where he talks shit to baddies from The Road Warrior and The Hills Have Eyes, scores with the hot girl who dies in the raft from Friday the 13th: The Final Chapter, and more. While this isn’t a top ten, Wyatt takes the cake, folks. Chet aint fuckin’ havin’ it, though. I mean the next thing you know he’ll be wearing a bra on his head.

Back Online. Back On Duty.