If you haven’t heard about “The ABC’s of Death” by now then prepare to have your mind BLOWN! To sum it up, this “movie,” which is a term I use lightly as it’s actually 26 individual films by 26 different horror directors. Each individual short is related to one word and each begins with a different letter of the alphabet. They basically just gave each director a letter, told them to come up with a word and make a 3-5 minute film about it. What they came up with will shock and amaze you!

When I first started watching this film I had no idea exactly what I was in for, were they all going to be related to the same thing? Should I expect some of the letters to be some common denominator in the horror genre? (E.g. Zombie for Z, Killer for K etc…) But what I found myself asking through each short was WHAT THE HELL IS THIS ABOUT! Every new story posed a new argument, or at least a friendly game between my boyfriend and me, as we each tried to figure out what word each “film” was about. That’s where this movie really drags you in. You don’t get to see what the word is, nor should I say “title” until after each short was over, no credits, no introduction just a black screen leading into the next one. It really left me on edge throughout the whole thing; some of them left me questioning where they even got the word(s). Needless to say the title’s alone got me hooked…but I’m sure you’re tired of hearing about titles and just want to get into the good stuff, believe me there’s a LOT of good stuff.

I could say that horror magic occurs throughout the film, or that there’s so much blood, gore and death, but honestly it’s more than that. There are a few REAL stories thrown in this film, some that will leave you wondering like G, F, O and Z,  some that could be made into feature length films and some that you just wonder WTF?

I want to take the readers on a ride through my likes/dislikes of the film so you can better understand the type of movie you are in for and what you may want to see vs. what you may want to skip so, this last part does have spoilers, I leave it up to the readers to determine how much you want to know and how much you want to learn for yourselves so with no further ado, here’s a detailed review of my hates/fav’s

My favorites, that really stuck out to me are D for Dogfight; a man searching for his “lost” dog finds him in the worst possible place, and takes revenge on the asshole that was using him. This one really used actions rather than words to express every emotion they wanted to convey, the one word used, which was all it needed was “buddy.” In that one word we know everything we needed to understand the story. A very moving and disturbing piece, if you love revenge films, this is the short for you!

F Is For Fart is another one that I really enjoyed, female lovers who are completely enthralled with each other’s flatulence. So much so that they would rather die by the smell of their lovers gaseous fumes than the toxic waste of a plant explosion. The mind trip this short takes you on is completely different from any other letter of this film and speaks wonders for what ABC’s of death was trying to accomplish. 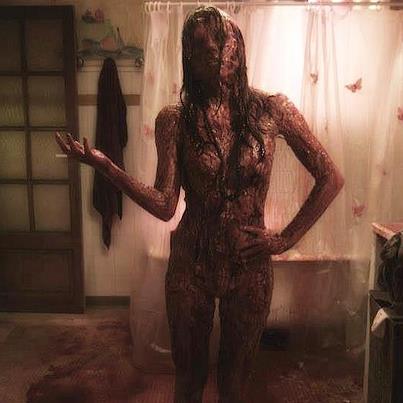 X is for XXL is the last one I’m going to mention as a favorite, although R and Z are 2 other shorts I deeply enjoyed X is one that means a lot to me, and I’m sure many others who have felt the same way the plus sized woman in this one felt. As a gal who’s lost a lot of weight, I feel as if I’ve walked a mile in her shoes, so to speak. A lot of us have dealt, or are dealing with being in public and not only feeling the stares of people as you walk by, but hearing what they have to say about the way you look. This woman dealt with it all in a short span of time, and probably happened quite often for the drastic measures she decided to take at the end. Some of us gorge on food to wash away the pain, some however know that skinniness lies underneath all of the fat and instead of exercising it away; they cut it away, literally. But you have to be pretty insane about weight loss to do what this voluptuous vixen decided to do.

As for what I hated, or at least disliked, I’m going to start off with M is for Miscarriage. If you’ve heard much about this film, specifically bad, you’ve probably heard about M. There’s really no story and all you really see is a woman desperately searching for something to help her flush the toilet, the bulk of the story is wasted on her trip through the house seeking anything to get whatever’s in the toilet to go away. In the last 2 seconds of the film you see what is supposed to be a rather large fetus in the toilet before she takes the plunger to it. You then are left to wonder, “How is this tall, skinny woman, in heels no less, running around the house looking for a plunger immediately following the delivery of this mutilated fetus?” To me, and many others I gather, it’s a waste of time and a horrible addition to the film

G Is For Gravity is another dislike of mine, as we are not really given a story or any info, other than this first person view of events leading up to the ultimate suicide of our cameraman. There are no words spoken, only actions leading up to his timely demise. It’s boring and although you do consistently wonder what’s going to happen next, the end is a culmination of “Why did I watch this?” Coupled with; “Well that was just stupid.”

N Is For Nuptials is the final “bad seed” for me, I would include I, K and O but I want to leave you guessing for yourselves. This one, however some may find to enjoy but I can’t help but mention my distaste. What seems to be a sweet and loving tale of a man in love with both; his girlfriend and birds, turns into a beautiful proposal leading into the undeserved death of a very naughty boy. You see, he taught his bird how to talk, specifically asking his girlfriend to marry him, only the bird overheard a little bit too much (the guy cheating on his girlfriend) so the now pissed off X-girlfriend takes matters into her own hands and stab’s her cheating lover repeatedly. To me, this is just a played out story line that I’ve heard and seen a million times and I would have preferred to NOT have seen it again.

I wish I could review this film as a whole but reviewing it piece by piece is the only accurate way I feel you can judge it, it has it’s moments with some let downs thrown in but all in all, its worth a watch. Now go see it and tell me some of your favorites and what you disliked.